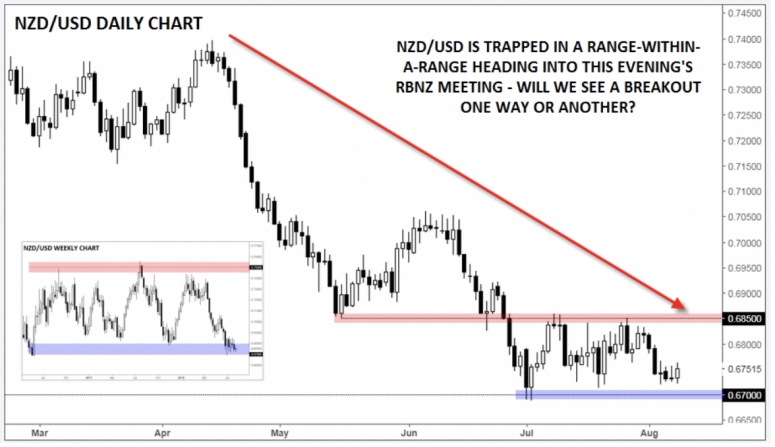 Falling in the awkward post-US, pre-Asian session, the Reserve Bank of New Zealand delivers its quarterly monetary policy statement Wednesday evening (21:00 GMT). While the release is functionally equivalent to the Fed’s “live” quarterly meetings when it delivers updated assessments on the economy, the primary difference is that the RBNZ is nowhere near making any meaningful changes to policy; instead, traders will try to “read between the lines” for more insight on how the central bank is leaning for the future.

Lately, the New Zealand economy has seen some signs of slowing down, including recent disappointing readings in retail sales, car sales, housing-market activity, commodity prices and business confidence. Set against that concerning backdrop, though, the economy is doing relatively well on the central bank’s two primary measures. Headline and core inflation are both rising toward the RBNZ’s target, while the unemployment rate is holding steady in the mid-4% range, a historically low level. With the small, export-oriented country particularly vulnerable to trade tensions, we expect that the RBNZ will err on the side of caution and make few changes to its forecasts, which recently have implied that interest rates will remain at the current level until late 2019.

Heading into the meeting, NZD/USD was in a particularly interesting spot. As the inset weekly chart below shows, the currency pair fell throughout Q2 to test the bottom of the 0.6700-0.7500 range that has contained rates for the last 2.5 years. Near the bottom of the longer-term range, rates have formed a tighter consolidation zone between 0.6700 support and previous-support-turned-resistance around 0.6850.

Like a Russian Matryoshka doll, NZD/USD is coiled tight in a range-within-a-range, so any confirmed break beyond the near-term range could lead to a sustained move in the same direction. Such a breakout is inevitable, eventually, and the RBNZ meeting could be the snowflake that starts the avalanche rumbling downhill (or “uphill” as the case may be!).