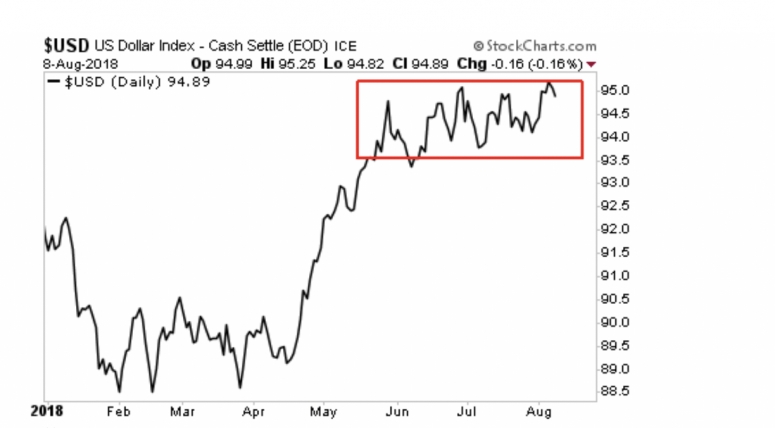 The Fed left rates unchanged last week, upgrading its view on the economy from “stable” to “strong.” It also reiterated its plans to raise rates two more times in 2018.

Put simply, this was a notably hawkish Fed meeting. Which is why it’s striking that the USD didn’t do much of anything in response. The greenback was effectively flat that day.

Truth be told, the USD hasn’t done much of anything since the Fed June meeting. Again, this is striking because the Fed is currently engaged in the single most hawkish monetary policy in history with 3-4 intended rate hikes per year and a QT program of $30 billion per month.

And yet, the USD has traded sideways since mid-June.

Let’s be honest here, if the USD cannot mount a major bull rally when the Fed is this hawkish (and other Central Banks are maintaining NIRP and QE programs), then the USD is in SERIOUS trouble.

The picture worsens for the USD when you start including currency pairs.

The Australian Dollar, the Canada Dollar and the New Zealand Dollar: USD pairs are all bottoming right now. This is a MAJOR signal that the USD is turn sharply down.

So, we’ve got the USD failing to breakout to the upside despite the Fed running the most aggressively hawkish monetary policy in history… as well as the three most significant inflationary currency pairs signaling pronounced USD weakness is about to hit.

That’s a heck of a “tell” from the markets. And it’s “telling” us that we’re about to see a major inflationary move.